Matsuyama City in Ehime Prefecture is the largest city in Shikoku and has long been known as a hot spring resort due to the presence of Dogo Onsen.

It is also the birthplace of famous Japanese literary figures such as  writers and haiku poets. Since the city has also developed as a castle town, a strong and unique culture has taken rootwhich is distinctive from other cities.

As such, Matsuyama naturally has many attractions and unforgettable things to do. Here we will introduce some of our recommended for the best things to do in Matusuyama, Japan.

The striking and commanding Matsuyama Castle is the newest of the 12 existing castle towers and the last castle built in Japan. Located in the center of Matsuyama City, it stands atop the 153-meter-high Katsuyama Mountain and is a symbol of the city.

Along with Himeji Castle and Wakayama Castle, Matsuyama Castle is one of Japan’s three largest castles, and its castle tower and 21 other buildings on site have been designated as national important cultural properties.

There are walking trails leading up to the castle but for the less energetic there’s a ropeway and a chair lift which you can catch from the ropeway station at the end of Okaido street.

In spring, the area around the castle is a popular flower viewing spot with cherry blossoms in full bloom.

A short walk from the Okaidou Station tram stop is the Matsuyama Ropeway Shopping street. The gently twisting road leading to Matsuyama Castle is lined with cafes, retro and modern stores, creating a beautiful and picturesque scene.

You can take a break at a stylish cafe or restaurant, or rent a bicycle and take a stroll and a must-try is the “Foggy Forest Daifuku Confectionery Workshop. The balance of the soft, glutinous skin, red bean paste, green tea, and cream is well worth a try.

After visiting Matsuyama Castle, you can enjoy Shingucha Soft Ice Cream sold in many stores, along with local Mikan Juice that comes straight from a faucet.

This unique French-style villa was built in 1923 by Count Hisamatsu who was a descendant of the former feudal lord of Matsuyama. The architecture, which retains its original appearance is designated as a National Important Cultural Property.

The stunning villa quietly standing amidst lush trees looks like a European castle and the scenery is so far removed from the Japanese landscape that it makes you feel as if you are in another world.

The first floor is open to visitors free of charge, and special exhibitions are held on the second floor.

Pro Tip: The rose garden is at its best during the month of May.

The main attraction in the wonderful Dogo area, Japan’s oldest hot spring resort, is undoubtedly the enchanting Dogo Onsen Honkan, which is the unmistakable symbol of Dogo Onsen.

The Dogo Onsen Honkan is designated as a National Important Cultural Property and is so overwhelming that tourists staying at nearby hot spring hotels go out of their way to enter the building.

There are two bathhouses, the Kaminoyu (divine hot spring) and Tama-no-yu (spiritual hot spring), for men and women, respectively, and four price categories.

Kamino-no-yu is available for any price category, while only the top two price categories are allowed to bathe in Rei-no-yu.

With the top two categories you are allowed to visit the luxurious “Matashinden,” a bathroom exclusively for the imperial family, and the “Botchan-no-ma” room.

Pro Tip: The Dogo Onsen main building is also recommended at night when it is wonderfully illuminated.

Dogo Onsen has two outside hot springs, Tsubaki-no-yu and Asukano Onsen. Tsubaki-no-yu or the Camellia Hotspring is used mainly by locals as a public bathhouse.

The hot spring water is free-flowing, without additional heating and it is more spacious than the main building, so it is recommended for those who want to enjoy the hot spring at a leisurely pace.

It is a restored version of the original train described by Japanese literary icon Soseki Natsume in his classic novel Botchan.  As described in the novel as a train resembles

a  matchbox from inside, it runs at intervals of about one train per hour.

It’s worth taking a ride on the charming Botchan train to enjoy the retro atmosphere, but even if you don’t ride the train, you can take a look at the train at the Dogo Onsen Station, where it is displayed in the space in front of the station between runs.

Nicknamed Dogo Hi Karara Dori or the High Color street this 250-meter L-shaped shopping street is located between Dogo Station and Dogo Onsen Honkan and is lined with a variety of stores.

It is a traditional hot spring shopping street and it’s a popular place to take a stroll around in a traditional Japanese Yukata after visiting the bathhouse.

Isaniwa Shrine was known in ancient times as Yuzuki-Hachiman, and was built in the mid-9th century during the reign of Emperor Seiwa.

Of particular note is the vibrant vermilion-lacquered shrine pavilion, which can be seen from the bottom of the towering 135-step staircase. It is said to be one of the three great Hachiman-zukuri shrines in Japan, along with Usa Jingu Shrine in Oita Prefecture and Ishiharamizu Hachiman-gu Shrine in Kyoto Prefecture.

The beautiful vermilion color continues all the way to the beautiful hall of worship, and the pillars are covered with rich gold leaf. The carved, highly colored ebikoryo style beams give the building a gorgeous impression from all angles.

The shrine’s deities are Empress Jingu, Emperor Ojin, Emperor Chuai, and the Great Three Pillar Princesses, and the shrine is said to give you good luck in love and academic success.

The one-of-a-kind Ishite-ji Temple was founded in 728 by Ochi Tamasumi, a feudal lord of the old Iyo province.

The temple’s spacious precincts are lined with buildings such as Niomon Gate which is a national treasure, the main hall, and the three-story pagoda.

Yuzuki Castle, a flat mountain castle, was built by the Kono clan, which ruled Iyo in the Middle Ages. Now Dogo Park, the site has high historical value as remains of large-scale moats and earthen mounds from the middle of the Warring States Period still exist.

There are samurai residences and an earthen mound exhibition room, faithfully restored to their original state, allowing visitors to experience the history of Matsuyama and the Samurai Age firsthand.

This small but fascinating temple of the Jodo sect was built in the year 812 and is famous in Dogo as the protector of its beloved water source.

A surprisingly large statue of Jizo Bosatsu stands in the inner part of the temple and makes an impact with its white paint and bright red lips.

Enman-Ji Temple is also known for its items that claim to bring good luck in love, such as the omotsudama or egamama which is a ball of hot water held by Jizo in his left hand, and haiku love lottery.

Clouds Over the Hill Museum

The Cloud over the Hill Museum is a modern museum based on the classic novel titled Kumo No Saka No Ue or Clouds over the Hill by Japanese literary giant Ryotaro Shiba.

In addition to exhibiting many materials by writers with connections to Matsuyama and the Akiyama brothers who feature in the novel, visitors can immerse themselves in the world of Ryotaro Shiba.

The building designed by the famous Japanese architect Tadao Ando alone is worth a visit even if you are not into the literature itself.

The fascinating  Ninomaru Historic Garden is a historic garden located on the grounds of the former site of Matsuyama Castle.

The “Rinsen-Teien” on the east side expresses the uniquely Japanese concept of  “wabisabi” with ponds and waterfalls set against a background of exposed rocks.

The garden is also popularly considered a romantic hotspot and as such is popular for wedding shoots, with several hundred couples visiting the garden each year.

This is one of the largest parks in Shikoku, with a total park area of 41 ha. It has several sports facilities, including the main baseball stadium Botchan Stadium and a baseball history museum.

The stylish Ehime Museum of Art was opened in 1998 in the ruins of Matsuyama Castle, a national historic site, and despite its modern design, sits in harmony with the castle landscape.

The Ehime Museum of Art is a magnificent building that stood near the south side of Shiroyama Park, which stretches to the west of the Ehime Prefectural Office.

In downtown Matsuyama, there is a huge Ferris wheel on the roof of the Iyotetsu Takashimaya department store in front of Matsuyama Station.

It takes about 15 minutes for a full spin and offers a 360-degree view of central Matsuyama, and on a clear day, you can even see the islands of the Seto Inland Sea in the distance.

Of the 32 gondolas, two are see-through gondolas with transparent glass floors so you can enjoy the view as if you are floating in mid-air.

Pro Tip: On your birthday month, no matter how many times you ride the gondola, the ride is free and up to three accompanying persons can also ride for free.

Tai-meshi is a Sea bream and rice dish that is a must-try local gourmet dish.

This is a rare way of eating sea bream, with the sashimi marinated in a special broth with egg and served over hot rice with the entire broth.

The rice is served with sauce, which is a rarity in Japan.  Although it is a local dish from Uwajima City, it is also available in Matsuyama.

The fascinating Towel Museum,  in Imabari City, in the north of Ehime Prefecture, is an art museum where you can enjoy exhibits and artwork related to towels.

Imabari City is known as the largest towel production area in Japan, and the stylish museum was constructed by a local towel manufacturer.

Visitors can enjoy exhibits of towel art, such as large food items made of cotton, and a “thread wall” made of approximately 1,800 colorful winding threads of 200 colors.

Other attractions include a tour of the towel manufacturing process, special exhibitions held, and a permanent Moomin exhibit that is popular.

In addition to shopping, restaurants, and cafes, the park also has a vast European garden where you can enjoy beautiful flowers in every season.

The unforgettable Shimanami Kaido is a 70-kilometer-long road that island hops over the Seto Inland Sea. It is accessible by car and bicycle and is known as the Mecca for Cyclists where you can enjoy the beautiful scenery of the many islands below.

Where To Stay In Matuyama/Dogo

On our last visit, we stayed at the fantastic Dogo prince Hotel which has Various types of rooms available, including rooms with an open-air bath where you can enjoy the hot water of Dogo hot springs. 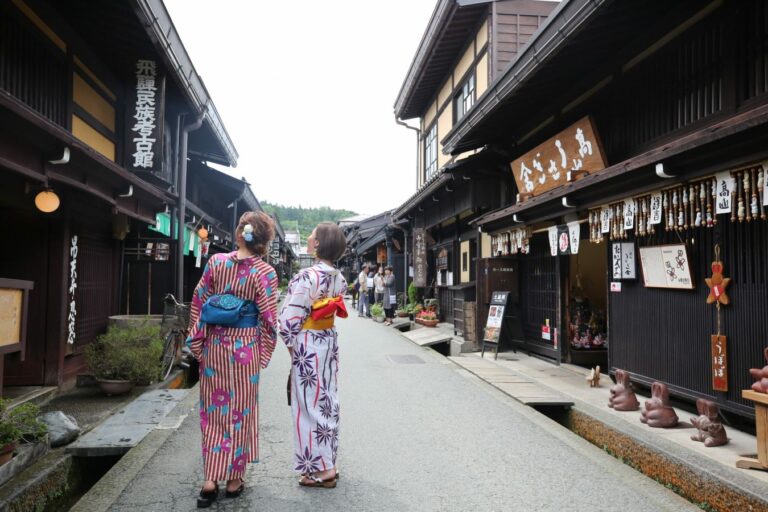 The picturesque Takayama City, located in the Hida region of northern Gifu Prefecture, is a popular tourist…